The BISMI CASHEW COMPANY is a manufacturer – exporter of Indian Cashew Kernels of different grades was established in the year 2006; the founder being SHIYAS. He belongs to the fourth generation cashew industrialist having over 20 years exposure to the present line . Now the organisation have seven factories and two packing centres. The organization is now on the path of further expansion and diversification. The Organisation has implemented BRC Global standard in Food Safety (“AA” Grade Certification), FSSC 22000, HACCP, ISO 9001:2008 (QMS), ISO 22000:2005 (FSMS) & FSSAI at process levels at Factory, Packing Centre and marketing level.

Mr.SHIYAS is a qualified, highly experienced young business man. He is committed to establish and maintain high standard in quality and food safety of kernels process and delivered to customer to make it a greatly sought after product in the national and international markets. He spends most of his time in the process area ensuring high standards and maintains at every process step of the product.

Shiyas is totally committed to maintain high standard in quality and food safety of kernels delivered to Customer / Consumer. He spends most of his time in process areas, observing and giving directions wherever found necessary.

Headquartered in Kollam, Kerala (India) is a Manufacturer – Exporter of cashew kernels over a decade and its among the most reputed supplier of quality Cashew Kernels from India. A Govt of India recognized "Star Export House"
Bismi Cashew Company, Mangad P.O, Kilikolloor, Kollam-691015, Kerala, India
http://www.bismicashewcompany.com
(+91) - 0474 2710966, 2716766
info@bismicashewcompany.com, bccshiyas@gmail.com 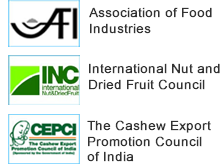